History of Direct to Garment 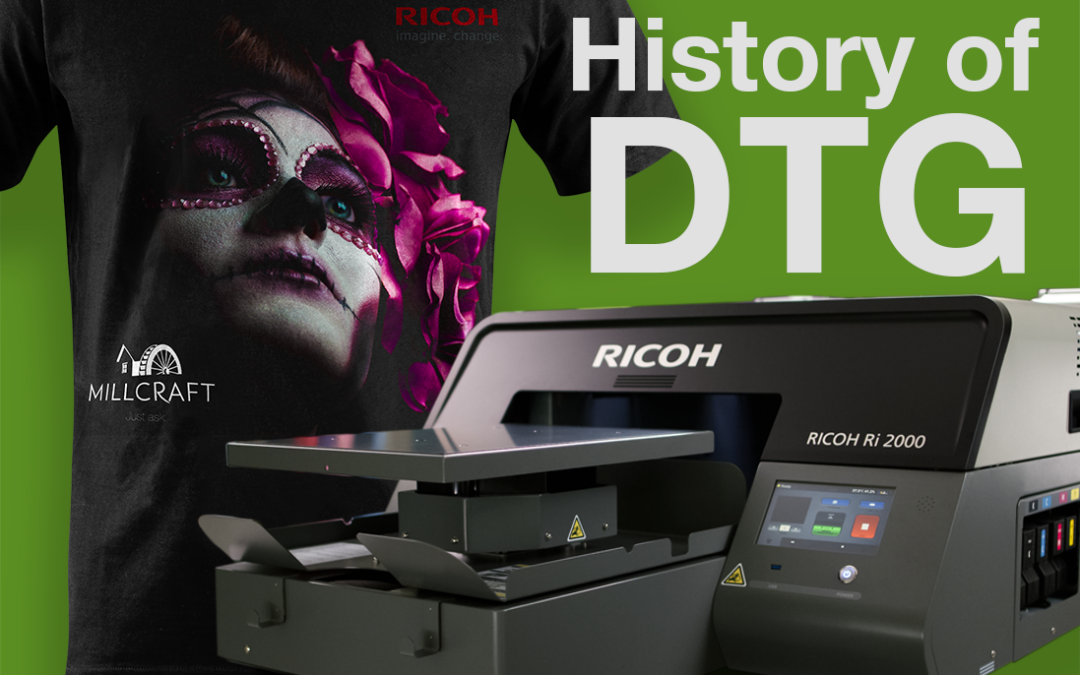 The advancements in Direct to Garment printers, since its introduction, have been simply amazing.

Back in the 1990’s, Matthew Rhome had an idea of being able to use an ink jet printer to print directly onto a t-shirt.  By 1996, he filed a patent for Direct to Garment and introduced to the world (with the development help from DIS) the first commercially available DTG printer named: Revolution.  And just like the printer’s name, this was revolutionary.  By 2005, Rhome joined with Brother to release their first DTG printer made from the ground up.  Many early DTG adopters would purchase standard ink jet printers and modify them into a garment printer.

Direct to Garment printers, in the early days, could only print using CMYK (Cyan, Magenta, Yellow, and Key/Black).  This made it very difficult to print on t-shirts that were dark in color.  Colors such as navy blue, forest green, and black were not able to be printed on as the color of the shirt would overwhelm the color of the ink.  This resulted in the inks losing contrast making it look grey and very difficult to see what you printed.

This all changed in November of 2005, when Direct to Garment saw the introduction of white ink.  This changed the game again.  Now, we are able to print on the dark garments by printing the image with a white layer first, then adding the color layer over it.  However, white ink has its pain points.  The white ink is made with titanium dioxide.  Each day, pigment settles to the bottom of the container.  This can cause issues when trying to use the white ink as the pigments are difficult to push through the print head.  Which is why, each morning when you get to your shop, you need to pull the white ink and give it a good shaking for a minute to blend the contents inside of the white ink cartridges. When applying white ink onto a garment, the white ink will not bond correctly out of the gate.  Pretreat is needed to be applied to the garment for the white ink to react with the garment correctly.  In the early days, print shops would use a Wagner paint sprayer (or similar) to apply the pretreat.  However, pretreatment is a scientific process.  Too much pretreat, and your image will peel off like a sticker.  Not enough pretreat, and your image will lose a lot of its vibrancy.  This is when the introduction of pretreatment machines hit the market.  These machines allowed the user to have better control over the amount of pretreat that was sprayed into a garment.  Although this helps significantly better than a paint sprayer, you still need to do some fine tuning to make sure you applied the correct amount.

In 2011, AnaJet launched their mPower DTG printers.  These printers were the AnaJet MP5 and the AnaJet MP10.  The MP5 was the fastest digital garment decoration printer in its class.  The MP10 improved on this printing speed.  Both mPower series DTG printers have improved ink flow, improved ink loop delivery system, and less ink waste during maintenance routines.

January 2016, AnaJet was acquired by RICOH Printing Systems America, Inc and operates at the RICOH facility in Costa Mesa, California.

In May of 2017, RICOH makes their official entry into the Direct to Garment industry with the announcements of the RICOH Ri 3000 and the RICOH Ri 6000.  These two DTG printers provided faster print times with vibrant colors.  The two printers feature the RICOH MH2420 industrial-grade piezo-electric print heads that are rated at 100 billion actuations and includes a 7” color touch panel display to preview, organize, and print your vibrant designs.

The RICOH Ri 100 was unveiled at CES 2018.  Ri 100 is a compact and affordable DTG printer that can produce high-quality prints on a number of different garments.  The Ri 100 is a CMYK printer that is roughly the size of two milk creates stack on top of each other.  This DTG printer, not only prints the design on the garment, but also includes a heating system.  This heating system allows you to remove wrinkles from the garment before printing and allows you to cure the ink after printing.

Near the end of 2018 at the SGIA Expo in Las Vegas, RICOH announced its newest high-quality Direct to Garment printer called the Ri 1000.  The Ri 1000 came with new features that moved the needle even further for DTG.  Some of these new features include: an enhanced resolution of 1200 dpi x 1200 dpi, quick operation and production versatility, and a smart digital touch screen with an AI that monitors the printer’s activities to know when maintenance is needed. By 2019, the North American Direct to Garment market was currently valued at over $2.5 billion with a compound annual growth rate of 10.5% through 2021.  With the pandemic, more businesses have purchased DTG printers.  Direct to Garment is expecting to grow to 40% market share, making it the fastest growing segment in the textile industry.

In the second half of 2020, RICOH announced the Ri 2000.  Improving on their Ri 1000, RICOH created the Ri 2000 to have two separate print engines.  This allows for faster prints as the white ink is handled by one print head, while the other handles the CMYK.  The 2000 also improves on the maintenance tasks, adding automatic height adjustments, and an improved AI to monitor the printer’s parts and maintenance. Direct-to-Garment printing is a process of printing on textiles using specialized ink jet technology.  DTG printers typically have a platen designed to hold the garment in a fixed position, and the printer inks are jetted or sprayed onto the textile by the print head.  DTG typically requires that the garment be pre-treated with a Pretreatment machine allowing for a stronger bond between the garment fibers and the inks.  Pretreatment also helps to lay down the loose fibers for a smoother substrate and creates a chemical reaction with the inks during the curing process.